Perfect pictures? It's not about the camera! 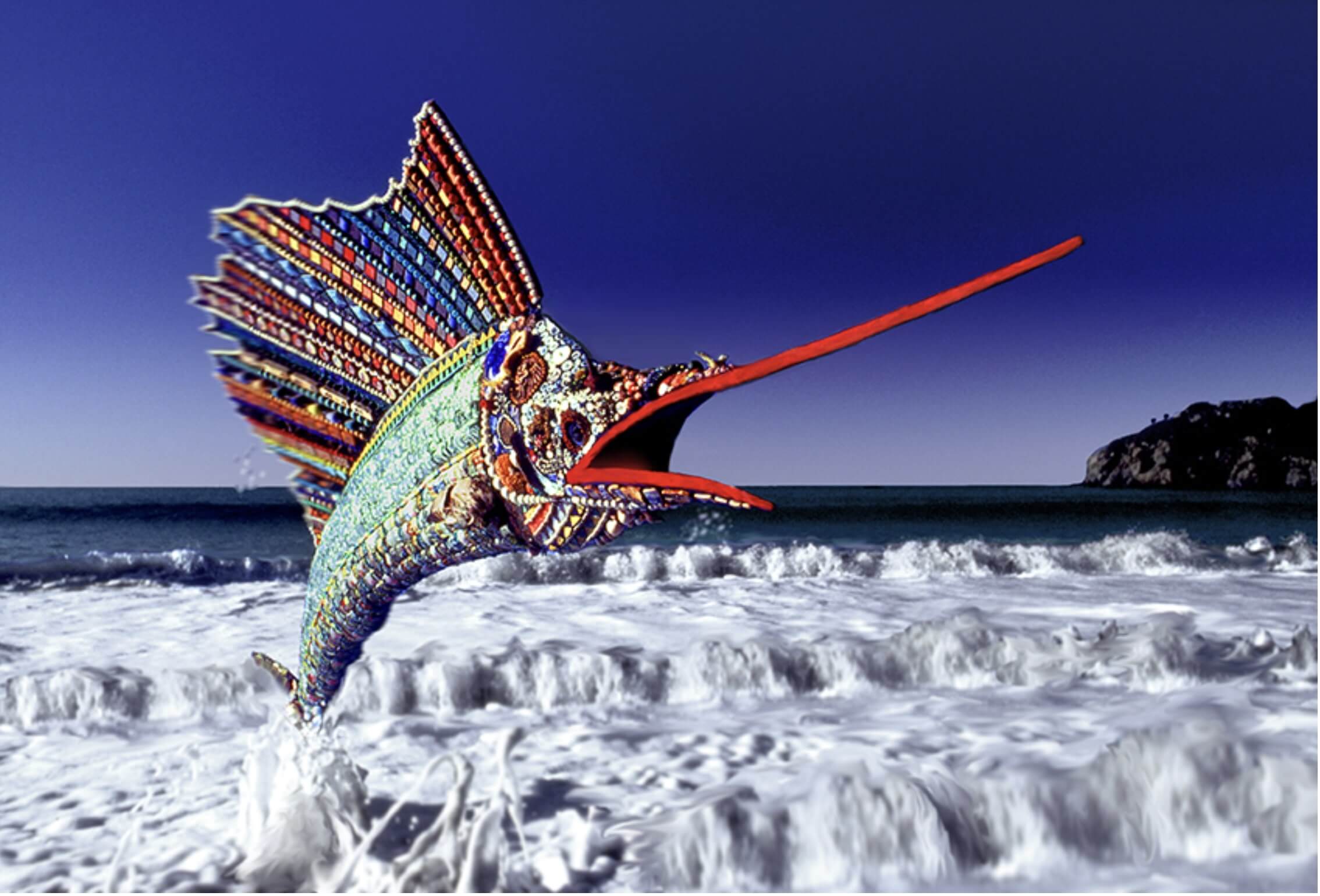 For a reportage, I had laboriously dragged the Californian object artist's work to the beach, a six feet long, elaborately designed fantasy fish in splendid colors. To show it off as effectively as possible, I attached it to the slender metal pole I had brought along for the purpose and placed it right at the edge of the surf. Now he looked as if he were diving in a bold leap straight out of the foaming surf.

But the real, fatal drama then happened unawares. I was already up to my knees in the water, camera at the ready. Then I saw the wave coming, pressed the shutter release, quickly pulled up the camera, and saved myself with a leap onto the beach. The surge of water behind me grabbed the magnificent mythical creature, it detached from the pole, its dorsal fin broke off and was mercilessly swallowed up by the surf. Everything happened in seconds, and out of five photos there was only one successful one - the sea had not let me more chances. The resulting damage was generously paid by my client.

How Dynamics developed in Photography.

A brief look back over 100 years: It's amazing under what conditions pictures were taken in the infant days of photography. The cameras were large and heavy, rested on clumsy tripods, and their operation could not have been more awkward: Checking the subject under a blackcloth on an upside-down matte screen, focusing with a tape measure and knurled rail, estimating exposure time, cocking the shutter, changing one film cassette per shot.

And then, in 1913, Oskar Barnack invented the 35 mm camera, the legendary Leica. As is so often the case with innovations whose significance was not immediately recognized, it was initially met with great restraint and was not taken seriously at all - so small, so ridiculous!

But in the end, it revolutionized photography. The decisive reason: its small size and quick operability opened up entirely new opportunities for photographers. Now it was possible to spontaneously perceive special situations and surprising moments and no longer miss them. The 35 mm camera ushered in the exciting era of photojournalism and has helped shape it to this day.

There were other inventions that changed the mobile work with the camera and thus led to completely new styles:

‍The zoom lens, which made the photo luggage smaller and photography faster.
‍The autofocus, which mastered fast scene changes and thus made event photography much easier, for example.
‍The Steadicam, which revolutionized dynamic filming.
Then there's the tiny Actioncam, which takes us closer than ever before, right to the heart of the wildest scenes.
And the camera drone that sensationally changed the way we look at things. Finally, Steadify is also part of it, the stabilizer from the hip, because it enables more agility.

And it's always about agility.

Until the digitalization of photography, roll film was the main photographic technology, which was a huge step forward away from the cumbersome plate camera. In advertising, the quadratic medium format of the film material was preferred because its high resolution made it possible to print large posters and also because the graphic designers could choose any crops they wanted without loss of quality when designing the ads. In terms of handling, however, these cameras were quite cumbersome.

‍In journalism, on the other hand, it was the flexible and fast 35 mm format that photographers used to travel the world. I remember a remark made by a picture editor at GEO magazine: photographers who proudly presented themselves with their medium format camera had no chance of getting an assignment here. GEO simply didn't trust them with the mobility they saw as a prerequisite for the editorial team's demand for unusual pictures under any conditions.

What shapes my Photography.

My own experiences have shown me this time and again. Already, when packing before the next trip, the first important decisions arise. What is necessary for this job, what is superfluous? With increasing experience, I had developed a system that worked well for me. For the journey, I consider all contingencies. I rarely use my 400 mm telephoto lens, for example, as well as the travel tripod and extra light. But for the few occasions where it's critical, I also have these parts at least still in my main luggage in the hotel or in the car. Without them, however, I am optimally flexible when I am at events or in difficult terrain. Because I only need a really long telephoto lens for special subjects, in nature or at sporting events. And when do I require a tripod or more light? Rather, only at the end of the day, or under extremely low light conditions. Most of the time it is not necessary, then it stays behind. In many situations, some lens, extra light, one more camera, or a tripod can be rather a hindrance. Mobility has always been a crucial aspect when I get my photos.

The coverage of the balloon event in Albuquerque, USA, with dozens of hot air balloons at the launch andin the sky. Before sunrise, balloonists arrived with their trucks in the open field outside the city andprepared for the adventure, always with uncertain outcome, depending on the weather. Gondola baskets were unloaded, huge colored balloon envelopes were spread out, aggregates for buoyancy were put in position. Action everywhere, the voices of the many helpers, the loud commands of the teams, the hissing as the burners were lit, filling the balloon envelopes with hot air until they rose to impressive heights. Then the launches, the exciting moment when men tugged at the safety ropes until the basket with the balloon team slowly detached itself from the ground and floated majestically away.

And in the middle of it all: me with three cameras and lenses of different focal lengths. A back-breaking job that I would not have been able to do with even more luggage. Mobility was the most important prerequisite for capturing as many moments as possible, which were often over just as quickly as they appeared unexpectedly.

Oh, and then the day of the wedding of my friend Thomas. The mood around the magnificent table, exuberant and solemn at the same time. The scenarios that I wanted to capture changed constantly. I hardly got to taste the leg of lamb or sip the wine. I was able to perceive most of the motifs with the wide angle. For the close-ups of the faces, I used a small telephoto. Only the lighting conditions gave me a hard time, but a tripod would have taken away my flexibility, even a small travel tripod would have been too much. A monopod is the better alternative.

And here's another extreme example of film production in my immediate neighborhood - shrimp fishing with a cutter in the North Sea, absolutely adventurous. The weather was not so bad, but the permanent motion of the strong North Sea swell made it difficult for me to act on the swaying boat deck. Once, seals appeared unexpectedly on the port side, then again the wide trawl nets were hauled in, dragged on deck by strong hands and emptied into the containers below deck. Shrimp by the kilo, in between small floes that could not escape in time, crabs, inescapably scraped from the shallow seabed with the net. And finally, the fishermen dumped the shrimp into a steaming, boiling kettle of water at the stern of the boat. This way they kept their fresh taste for the gourmets ashore. I think the only reason I didn't get seasick was because I was totally distracted by my work.

Just Photo Technology is not enough.

In photography, the focus is often on the technology that is supposed to make great pictures possible. Lenses that open up different perspectives, cameras with great features, accessories with miraculous effects. It is regularly forgotten that there are more important things than the latest technology. At the top of the list is mobility.

With photography, we want to capture moments that are frequently unusual and usually fleeting. We strive for the special picture and let our creativity inspire us. Everything around us is constantly changing. The more agile we are with the camera, the more we can capture with it. We have to follow the dynamics. That doesn't necessarily mean big action and choppy scenes, it can be much more inconspicuous. Occasions like the chameleon pausing motionless for a long time and then snapping its victim with its long tongue in a flash. Or the nature photographer who waits patiently for the moment until the bee takes off, or until the surf breaks at its highest, or until an unexpected ray of sunlight creates the best mood for a moment of time.

What makes us mobile? Our curiosity, our condition, small luggage, light equipment. This is how images are created that are not possible with thick ballast or from the sofa corner. 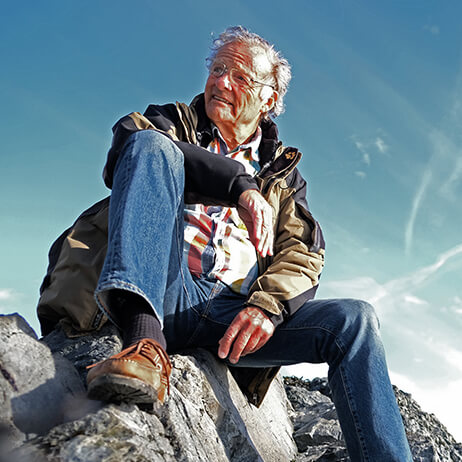 Gert Wagner travels as a photographer and cameraman for magazines, corporations, and brands on all continents and has received numerous awards for his visual language. He is also the inventor of flexible autofocus - now standard in every camera - and the HipJib and Steadify stabilization techniques for cameras.

Want to learn more about photography?

Get the free e-book "Photo Technique" by Gert Wagner, which we are preparing right now. It's full of photographic adventures and an inexhaustible inspiration for photographers and filmmakers. Just enter your email address and you will receive the e-book as soon as it is available.

Thank you! Your submission has been received!
Oops! Something went wrong while submitting the form.

If you enter your email, you also subscribe to our newsletter. We promise, that we're always doing our best to only deliver useful and valuable information to your inbox!

Zoom lenses are convenient, but what are their drawbacks?

What is the significance of the medium recording format with its corresponding sensor size today?

What technology can be used to replace a tripod?

Up to a natural limit, there are ways to achieve stability without a tripod that will still produce sharp images. Here are some options:

1. Increase the ISO values to the limit of visible image noise, select the largest aperture - both to keep the exposure time as short as possible.
2. Short focal lengths shake less than long ones, especially strong telephoto lenses are very susceptible to camera shake.
3. Lean or support your body while holding the camera with both hands and pressing the elbows firmly against your body.
4. A monopod is already considerably lighter and smaller than a tripod or even travel tripod and can be a great help.
5. Steadify, stabilization from the hip, is even smaller than a monopod, and its technique makes it more stable, mobile and spontaneous.

You should always keep in mind that a tripod is not only good for stability, but also supports the camera weight. For long stand-by, this can be especially important. Alternative solutions like monopod or Steadify can do that. 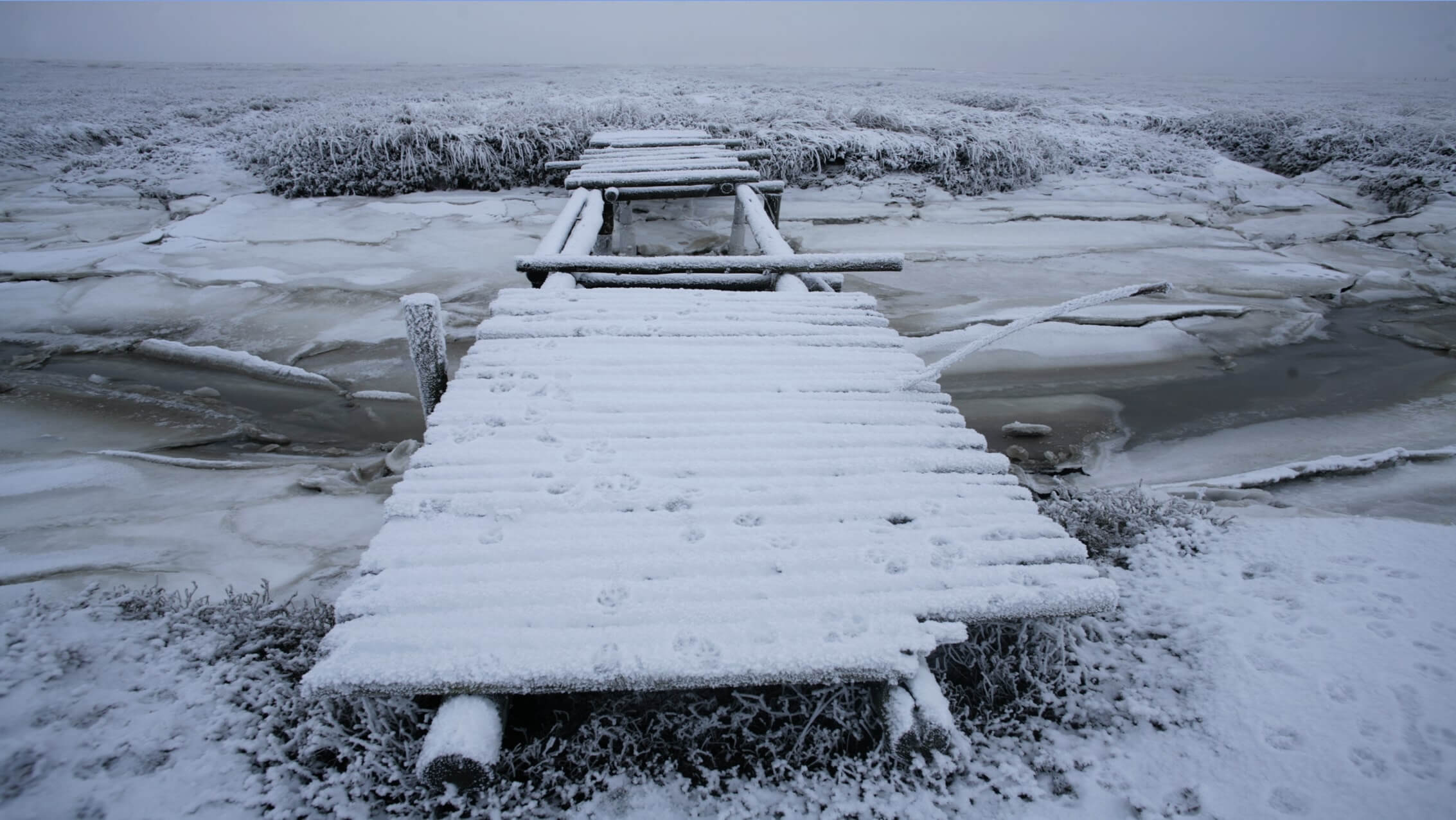 My most beautiful films were taken without a tripod

My boots crunched on the frozen ground, it was the only sound in this icy, seemingly lifeless landscape. I stopped. Now it was eerily silent... 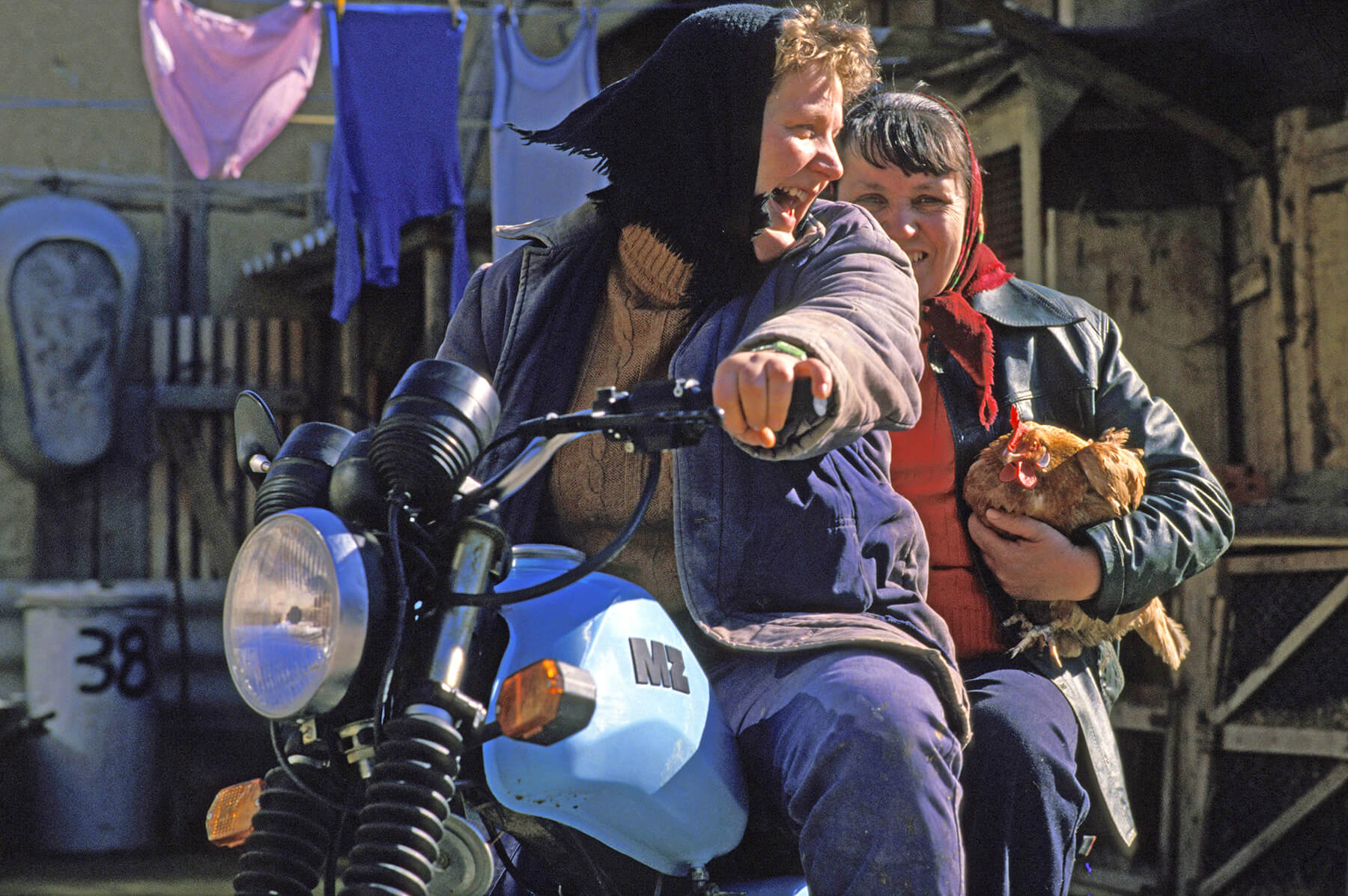 Portraits around the world – this is what I learned

With a powerful kick, the farmer's wife threw on the starter of her motorcycle, a second climbed onto the back seat with a fat chicken under her arm. I barely had time ...